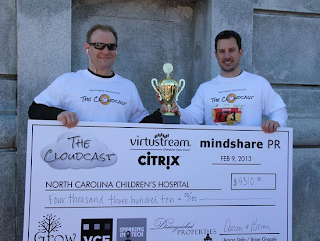 Last week we announced that we're starting both our training and fundraising for the 2014 Krispy Kreme Challenge (@k2challenge). 8000+ runners, 5 miles, 12 donuts, uphill both ways. And once that stupidity is over, the event makes a HUGE donation to the NC Children's Hospital (@ncchildrens) - for 2013 it was over $180,000. People might laugh at the participants in the event, and they should since it's blatant gluttony, but the impact they make to those families is significant.

This year we've decided to raise our target goal. Last year it was $2500 and we raised $4310 with your generosity. This year we started our goal at $5000, but we really think we can do quite a bit more ($7500?, $10,000??). The hardest part for Aaron and Brian is asking people for money. We know it all goes to a great cause (100%, every penny), but it's tough for us to ask. So we're borrowing an idea from FundAnything.com and giving "rewards" back to you for your generosity and donations.

Here's how it works. At various levels of giving, we're offering something back.
NOTE: These levels are additive. You get all the things at your level and below it.


$10-$25: Recognition on the podcast, website and big check given to NC Children's Hospital

$50: The Cloudcast t-shirt (the good "softy" ones that are popular at tradeshows now)

$250: Be a guest co-host on an episode of The Cloudcast

$500 (corporate level): Sponsorship of The Cloudcast for one month (4 shows)

$1000 and beyond: Let's talk, we'll coming up with something awesome!!


So that's the new "rewards" model for 2013/2014. We hope you think the incentives are interesting enough to help out children and families in need of amazing medical attention. These aren't just 'cough & cold sick' kids, these are kids with cystic fibrosis, hemophilia, sickle cell disease, cancer, heart disease, trauma, including severe burns, gastrointestinal disorders, infectious diseases, birth defects, and problems of growth and development. And these aren't just for kids in North Carolina - the NC Children's Hospital helped families from 43 states in 2012.


By the Numbers
In 2012, they treated children from all 100 counties in North Carolina and from 43 states across the country.
Posted by Brian Gracely