Topic 1 - EMC and Puppet Labs announced “Project Razor” today, which is pretty different for EMC. Tell us what it is and how the project came together.

Topic 2 - What problems is Razor trying to solve? What makes it unique? Why did EMC decide to partner with Puppet Labs on an open-source project?

Topic 3 - There will be a demo of Razor on-stage at Chad’s World Live. What can you tell us about the demo?

Topic 4 - At Paul Maritz keynote this morning, he talked about Google-like operational models in the Data Center (or for the cloud) and how that was different than what traditional enterprises do today. Nigel had previously been at Google, so how does this attempt to bridge that gap?

Topic 5 - How could someone get started with using Razor, or get started using Puppet in conjunction with Razor?

Topic 6 - We’re excited about the possibilities of this new project, so The Cloudcast is going to sponsor a contest / challenge to find some unique ways that people will use it. Rules and details will be announced soon, but we’ll give away some fun prizes to get people moving towards learning about DevOps tools. Get started now!! 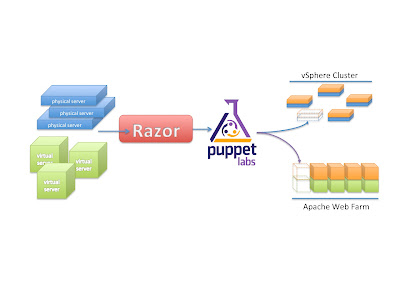 
Here is a quick video by Nan Liu of Puppet Labs showing how easy it is to install Razor via Puppet on Ubuntu Precise.


This video is a quick example of deployment with ESXi Models and handoff to Puppet Labs for automatic install of vSphere and configuration of clusters and virtual machines.